I had a crummy day yesterday. I don’t know quite what it was about the day, just a regular Tuesday, but it seemed to be going around. The colleagues I have joint office hours with in the morning also complained of feeling that it was a crummy day; the meeting I went to in the afternoon felt sucked of energy (and my own 2 minute report wasn’t any kind of stand-out, so I know that I, too, was responsible). Even Trevor, when he got home from work, told me that his day–independent of my own–was crummy in its own right.

But I have this magic thing that makes any crummy Tuesday better than it was, and I forgot about it until 3:59 p.m., at which time I walked into the student club I advise, and everything about the crummy day was put on hold.

Writer’s Block is the creative writing club on campus, and it was started in 2009 by some of my creative writing students who’d bonded so much over our class that they wanted to keep it going. They asked me to advise, and the next year I brought on my friend and colleague, Lisa, as co-advisor. The students have come in and out as they’ve matriculated in and through the school; sometimes they take just a semester, sometimes years, as is often the case at a two-year college. But regardless of who’s sitting in our meeting room on any given Tuesday afternoon, they always seem to make me feel better about the crumminess.

Yesterday they cheered me up with a love haiku; a poem featuring a potato (a running theme in the club [don’t ask me why; I don’t really know]); a short story about a mystical Druid army; a short story that read like the toddler of Vonnegut and D. Foster Wallace; discussions about speculative fiction, “magi-tech,” and why both Blade Runner and Phillip K. Dick’s inspirational novel (Do Androids Dream of Electric Sheep) are fantastic; and, the cherry on top, a half-dozen young writers who are just plain fucking cool.

Pardon my language. I feel strongly about them.

So next Tuesday, I will remember that at 3:59 p.m., no matter what, I’m about to feel a whole lot better. 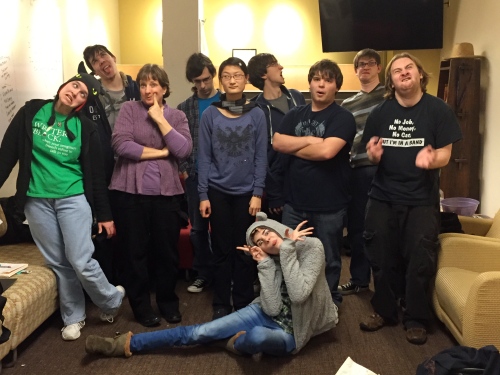