Yesterday morning, Trevor and I woke up early (early for a Saturday) to watch the Manchester United v. Tottenham match that kicked off at 6:45 a.m. CST. It was the first game of the Premiere League 2015/2016 season, and we won (although the only goal was an Spurs own-goal [the first time an own goal has kicked off the season in many many many years] so we’re not tremendously proud, and, likely, neither is poor Kyle Walker).

Not only did I wake up to watch this game — usually for a game that early, T. will come to tell me that it’s about to start, and I’ll mumble some nonsense like “I’ll be right down” into my pillow and then go back to sleep — but I stayed awake through the whole match, not taking my usual half-time nap (from which I usually don’t wake up until hours later).

This is what usually wakes me up.

And then the match was over; it was 8:45 a.m. on a Saturday morning and I was awake. (!!) Trevor, because he is a productive human person on the weekends, started his vacuuming routine, and I figured I’d try to do my part in the cleaning game. I scrubbed our two bathrooms and then showered up to be ready for the day. And it was still only 11 a.m. (!!!) I didn’t even know what to do with myself.

T. and I decided to have an early lunch and then do some wandering in downtown Crystal Lake to enjoy the rest of the morning. We stopped by CL’s used book store, Buy Local Books.

Some of the fiction we looked through yesterday

Buy Local will take your books, not for cash, but for store credit. And they’ll take almost anything as long as it’s in good condition. I have an account there but haven’t brought in any books in a while, so I used my remaining $.66 in store credit along with an additional $.68 in cold, hard cash for this little gem:

I am thankful to be starting school in a week, because I’ve spent much too much time lately buying books. And the stacks are starting to pile up. Last week I was in Evanston to get my hair cut by the Amazing Audrey at Art + Science, and, of course, I stopped in at Market Fresh Books, where they sell books by the pound. Yes. By the pound. If the summer wasn’t winding down soon, I’d be in some real biblio-trouble.

This stack of nine books rang up to about $38, and that Ephron alone is worth that much!

The pile above includes a bound galley copy of Chuck Palahniuk’s Pygmy with the reviewer’s handwritten notes on the flyleaf; a first edition of Nora Ephron’s Heartburn (containing a recipe for the best bread pudding I’ve ever had); and a trade paperback of Larry Heinemann’s Paco’s Story.

You might remember that I recently purchased a mass market copy of this same Heinemann book during our trip to Stone Soup Books in Camden, ME. And if you’re Trevor, then you know that I also have a number of other copies of this same book, mostly first edition hard covers.

It’s possible that there’s a fourth copy in my office at school.

I have a compulsion to buy any copy of this book that I come across. Heinemann was a graduate school professor of mine, and although I had excellent professors for every class during my years at DePaul, Larry was my favorite. And Paco’s Story is a great book, so I want to own them all. My additional excuse for picking up the trade paperback at Market Fresh is that it’s a reading copy that I’d happily lend out to any of my students. So, it’s like a giveaway book, and those are good to have (that’s also why I grabbed the mass market The Color Purple; I frequently do book giveaways in my classroom during Banned Books Week [Celebrating the Freedom to Read!], and this is a perfect copy for that use).

And now it’s Sunday. Trevor and I have watched more Premiere League games, eaten a breakfast of disproportionately sized pancakes, 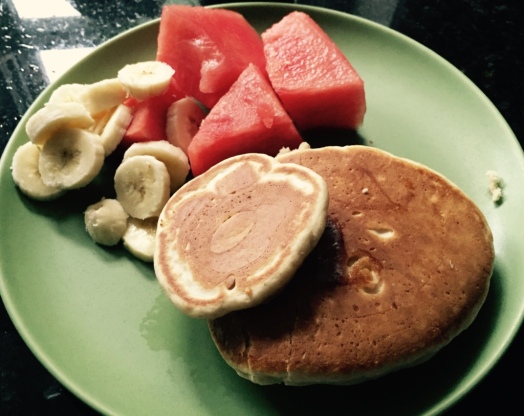 It’s like the big pancake has a smaller pancake hat on its head.

and we’re getting ready to dive into the pile of media we picked up from the library yesterday after we left the book store.

The Channing Tatum movie and Eraserhead are for me, as is the Scott Hawkins book (which I started but am having trouble getting into; though I heard good things about it, so I’ll keep going). At some point today, we’ll hunker down and watch some movies. And maybe take a nap. And then watch the season finale of True Detective while following the live Twitter feeds of people also watching it and reveling in its absurdly unclear dialogue and plot.

Because the carpets are vacuumed and the bathrooms are scrubbed, and the lawn is mowed (thank you for that, Trevor). So what else is a gloomy Sunday good for?

(except, maybe, macaroni and cheese. so, yes, we’ll probably eat some of that.)