Last month I posted about an election for two open seats on my college’s board of trustees, and…we lost. We managed to win one of the seats (Liddell — yahoo!) but we lost the other, and it was a real gut-punch.

I was in the doldrums for a couple of weeks about the loss. I felt crummy about my community and uncertain about the future of my college (will losing this seat mean another reduction in force? it’s almost certain.) I just doldrummed around for a while. Doldrumming. It was the pits.

And when I finally snapped out of it, I was swept up in grading student work and continued to neglect the blog. But now I’m giving it the attention it deserves and have decided to write a little post about some fun and happy things.

T. and I spent Easter with my nerd-tastic family, and we played around on Bo and Leo’s new jungle-gym. It was a hell of a lot of fun.

These are some good-looking family members. “Hot”, though? I don’t know.

Bo schooled us in monkeying around the jungle-gym

Leo got to the top very easily

Leo was a huge fan of his bunny Pez dispenser. 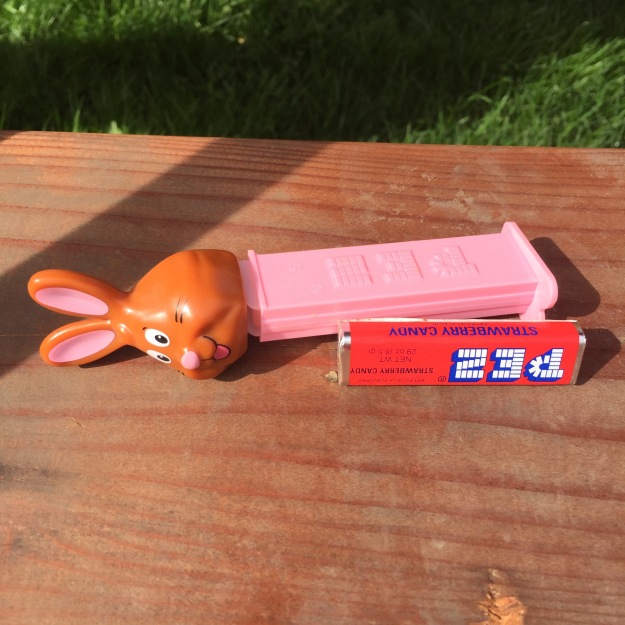 He was such a huge fan, in fact, that he picked up every single Pez piece he dropped in the grass. Every. Single. Piece. 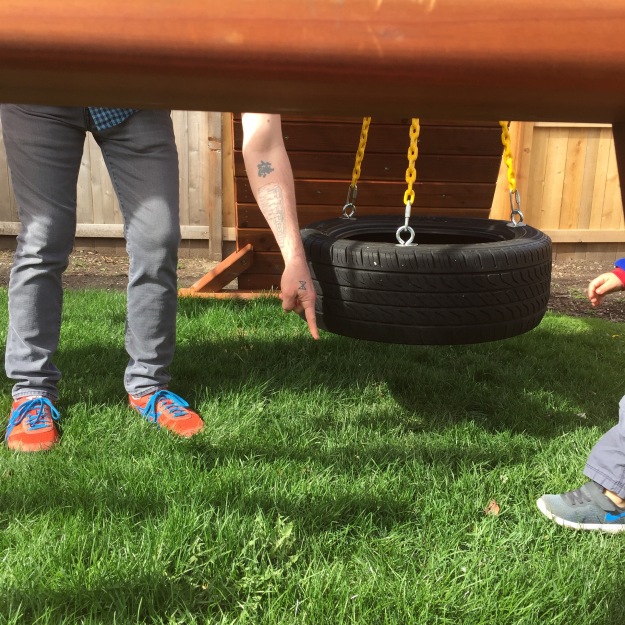 Hmm, thanks. Should I eat it?

Even T. got into the action.

Next, we got to celebrate the upcoming wedding of these two amazing humans:

Jayson and Cristen are getting MARRIED!

Jayson and Cristen are two of our favorite people on earth, and they’re getting married this summer — and we are very excited! I hung out at C.’s bridal shower last weekend, chatted up her wonderful family, ate some excellent food, and beat everyone at the couple’s trivia game. I owned that shower; I owned it!

Everyone also got these sweet party gifts. Thanks, Aunt Karen!

Cristen, I forgot to tell you that I had all of my classes analyze your short film “A Big Top Dream” for an in-class activity we did three weeks ago. They loved it (not surprising). Hey, everyone should watch it. Here it is (it’s literally one minute long and totally great, so just watch it):

I also planted some flowers from seeds that one of my students gave me. She’s getting her degree in horticulture, and I get to reap (get it?) the benefits!

And last but not least, Roo got a snood and she hates it! Hates it! And we think it’s HILARIOUS. 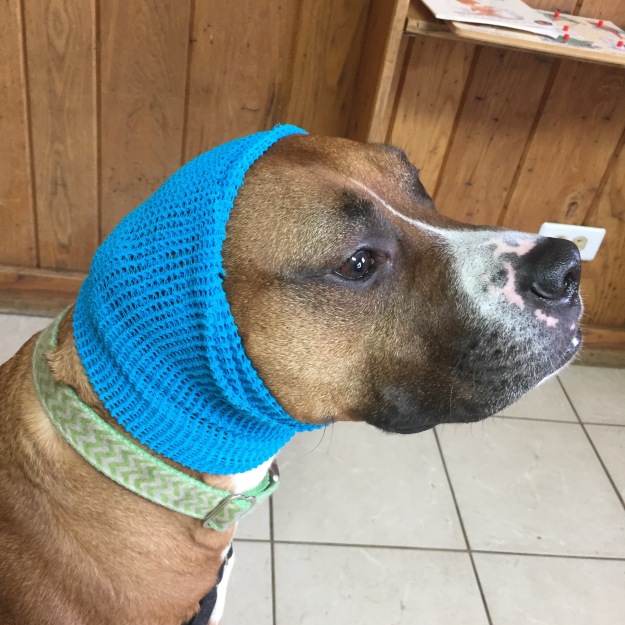 Erhmehgher get this off my head

She has this little scabby on the end of her ear that never really heals; she shakes her head and it immediately breaks off and shoots little blood droplets all over the place. We usually put a band-aid on it, but at her latest vaccination appointment the vet gave her some medicine to help with blood clotting and fitted her with this amazing head piece to help her ears from flopping around.

In about 30 seconds she’d shaken her ear free. So. Snood fail. #snoodfail

If you remember, last October Trevor and I hosted a visitor from the Netherlands as a scholar-exchange program through school. Well, it’s now time for the second half of the exchange, and I’m leaving for the Netherlands. Tomorrow!

I’ll have a lot more to say about that, so stay tuned. There will be posts-a-plenty and loads of pictures. Wish me luck!

This month’s showing was a celebration of female filmmakers, and our friend Cristen Leifheit was featured in the program. Of course we had to go to support Cristen, cheer on her amazing animated short film, Power(less), and check out what some other female filmmakers in the Midwest are up to.

Turns out, they’re up to a lot of good stuff: 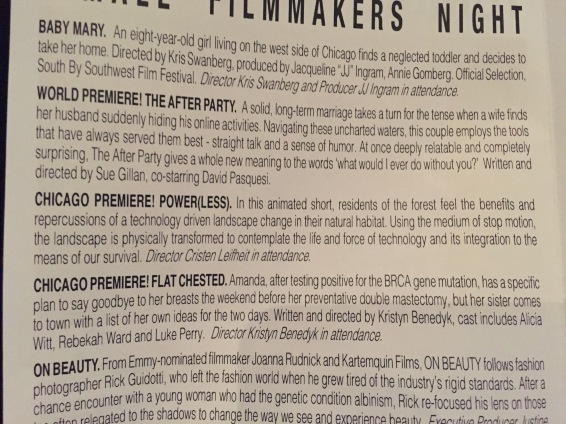 Here are some of the gang during the pre-show cocktail hour:

Cristen and her mom, Laura 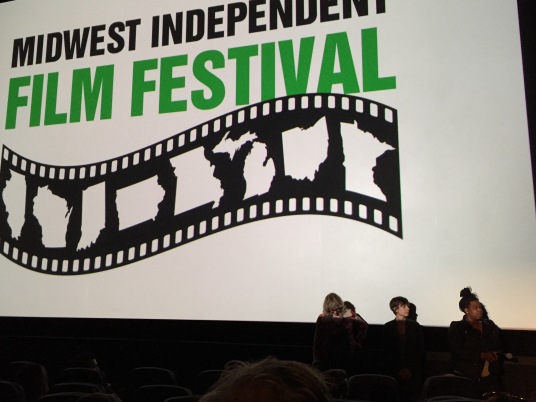 The disembodied heads of female filmmakers!

All of you should check out Cristen’s website for more of her work — she’s pretty much the best.

The weirdest part of the evening happened as we were walking into the theater. I ran into these adorable faces greeting the festival-goers:

Those two cuties are Emily and Matthew, students at MCC! (kwhat?! I know, weird, right??) They’d volunteered to be ushers for the event, and I loved seeing them, randomly and fifty miles out of my usual school context.

Emily and Matthew segue nicely into the stage portion of this post, because the two young actors appeared in MCC’s Spring 2015 production of columbinus. Some of you might remember that I helped out with the props for this show, and I was proud to be a part of such an interesting and thoughtful production.

And next month, I’ll be a part of another school production, the first summer show in MCC’s history (someone fact check that; I don’t know if it’s accurate…): God of Carnage by Yasmina Reza.

My character, Annette, has previously been played by Hope Davis (in the Tony Award-winning 2009 production) and Kate Winslet (in the Roman Polanski film version). So that’s freaking me out. And it’s actually scarier than filling Liza Minnelli’s shoes when I did Cabaret last year. I don’t know how this is possibly scarier than Cabaret, but it is.

We’ve been rehearsing for almost four weeks now, and all is going well. It’s a terrific play with a lightening fast pace, which makes memorizing lines a little tricky, but the four of us are doing well. Kellee Stall of Inhabit Theater is directing this show, and the crew — many familiar people from Cabaret — are kicking ass in the creativity and helpfulness departments. 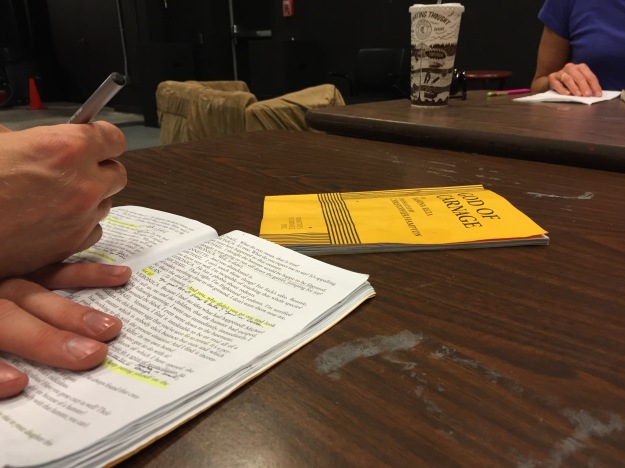 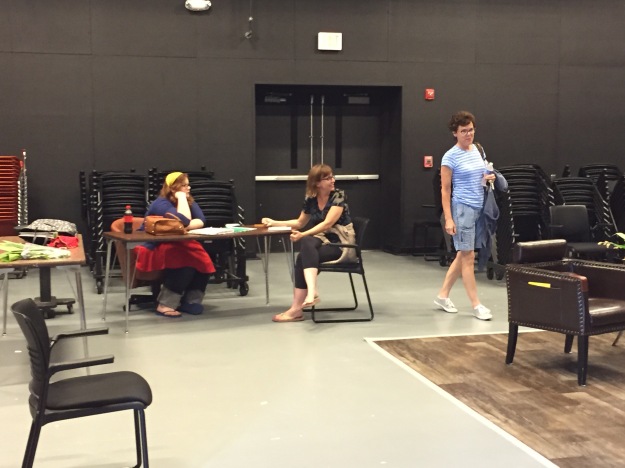 Getting into character with Crazy Helium Booth

Jay gets comfy on the set during break

I’ll have more about the show as we get a bit closer, but mark your calendars for the second and third weekends in July — and you’re all welcome to spend the night at Camp Crystal Lake (maybe not all of you…).

Come back on Monday for a new post about our Lake Projects Summer Writing Group. Until then, have a lovely weekend!