The Dutch are here!

Last week I wrote about the visiting Dutch scholar I’m hosting for the rest of the month. Through our exchange program, I’ll be visiting the Netherlands in May, but for now, my guest, Noemi, and the other six visitors are here, and they’ve been having a lot of fun so far.

They all arrived on Saturday morning, and four of us hosts went to O’Hare to pick them up. They got through customs easily, with the exception of Jacqueline, who declared the dog biscuits she’d brought as a gift for her host’s dog.

From Left: Anja, Noëmi, Rianne, Esther, and my fellow host, Lori–Rianne holds Jacqueline’s sign as we wait for her to get through customs

Once we got the whole group, the four above, Jacqueline, Patrick, and Frank, we headed back to Crystal Lake and our respective homes so our guests could relax for a bit and get over their jet-lag. Noëmi and I spent our evening eating pizza and talking about our respective colleges while Roo showed Noëmi every single toy she had, and Noëmi politely told her that she wasn’t interested in Roo’s sharpened bones. No, dank je. 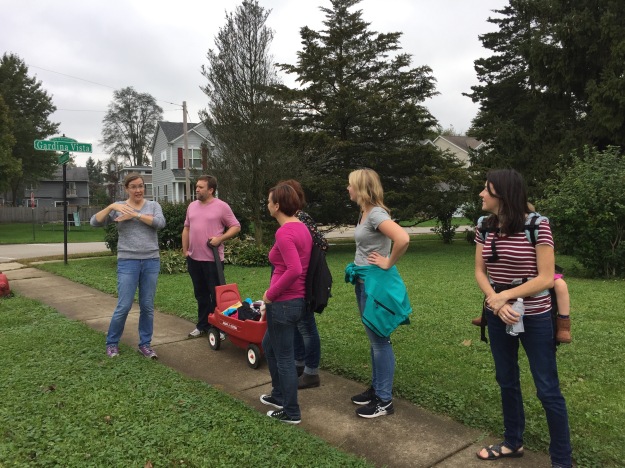 …and then that evening, Noëmi and I headed to her house for a potluck party at Lori’s with everyone. But, before we left for the potluck — like, minutes before — as I picked up the casserole dish that was housing my homemade macaroni and cheese that I was bringing to the potluck, this happened: 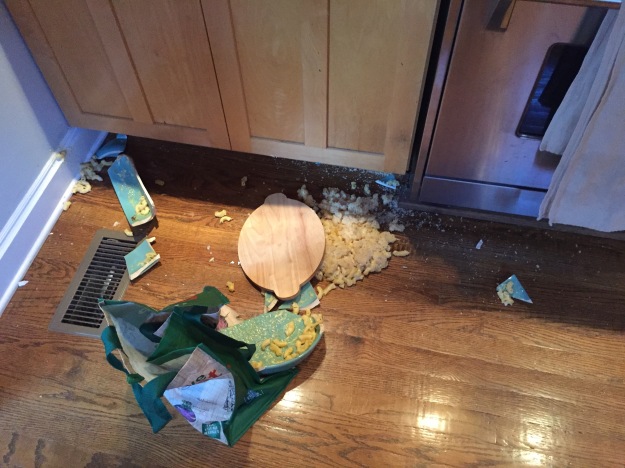 Yes, as the hot dish hit my fingers through the dish cloth I was using as a hot-mitt, I shifted my fingers quickly and dropped the casserole. The dish shattered, and macaroni and cheese was ruined on the floor, and Roo was very anxious to help me clean up.

So, we brought beer to the potluck instead, which was appreciated in a different way, and everyone had a great time.

Monday, Noëmi got to observe her first English class here at the college, and Anja joined her. It was my friend Robert’s class, and he was starting a new topic for a research paper, so Noëmi and Anja got to see how he introduced new materials and explained an assignment.

The visitors all got to take a tour of the campus, and had lunch with our president, Dr. Clint Gabbard, as well, but they wanted to do a bit of exploring in downtown Crystal Lake, so Lori and I took them for a coffee and a walk-around to some of the shops.

Rianne, Noëmi, Anja, and Lori at the cupcake shop 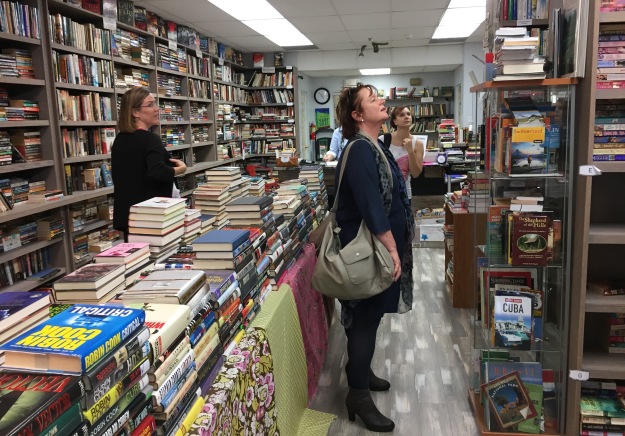 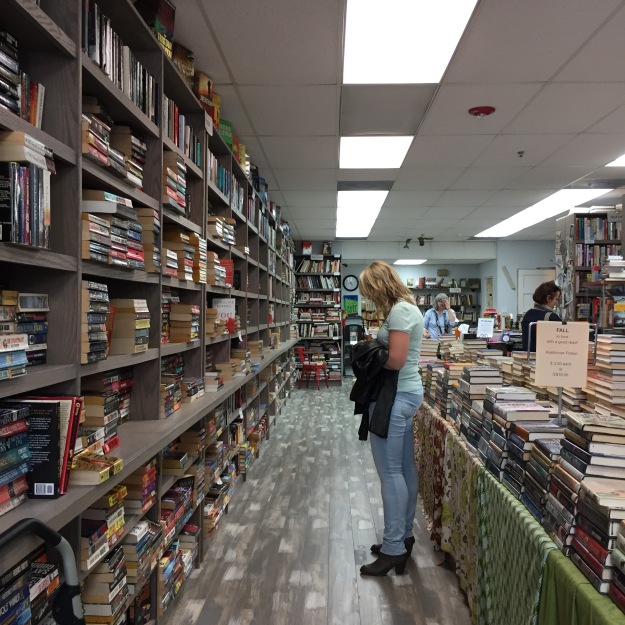 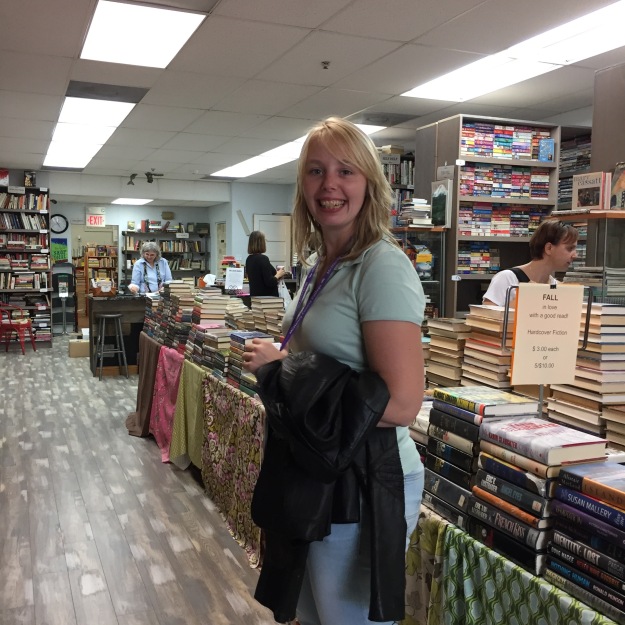 They appreciated the candy shop, but were tired by this time they were a bit worn down, so Noëmi and I headed home to rest. She is a fan of The Walking Dead, and since Season 6 was only just released this past weekend on the Netherlands’ Netflix, she hasn’t had a chance to watch it. So she told her boyfriend, Dave, to watch it back home without her and she and I would watch it this week to catch us up before the Season 7 premiere this Sunday. Needless to say, Monday evening was spent watching a bunch of The Walking Dead. Since I am kind of a fan of the show, and a good host, I felt obligated to watch them with her.

Tuesday, the group went on a neighborhood tour of Chicago led by my colleague and Instructor of Sociology, Mark. Noëmi took a lot of pictures, but I headed to the city myself for my Tuesday afternoon class. No pictures of my class were taken, but check out Noëmi’s blog for some of her Chicago pics.

The group before they left for the city. Roo tried to sneak on the bus, but she was discovered and kicked off.

On Wednesday, Noëmi got to observe two more classes… 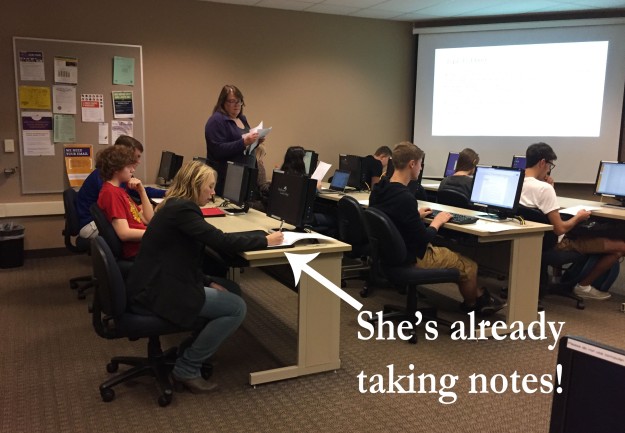 Noëmi in Anne’s class on Wednesday

…and then, yesterday afternoon, the college hosted an open house to meet all of the visitors. And there was ice cream.

Frank has got Timothy, Amy, and Tim on the edges of their seats! 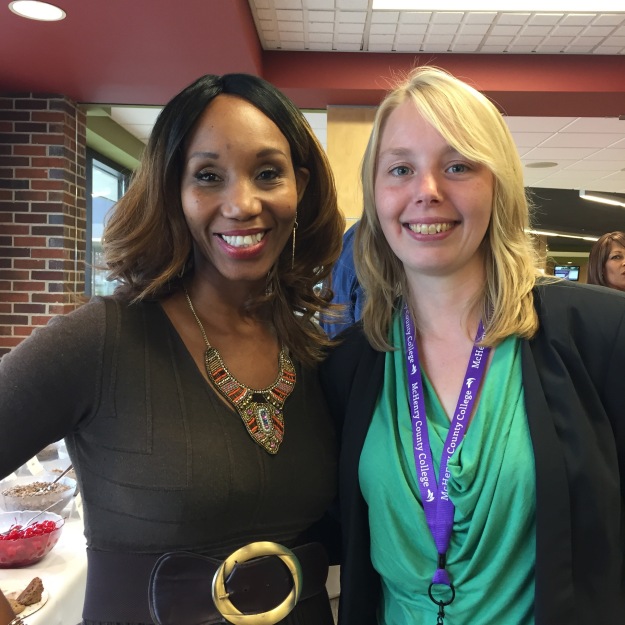 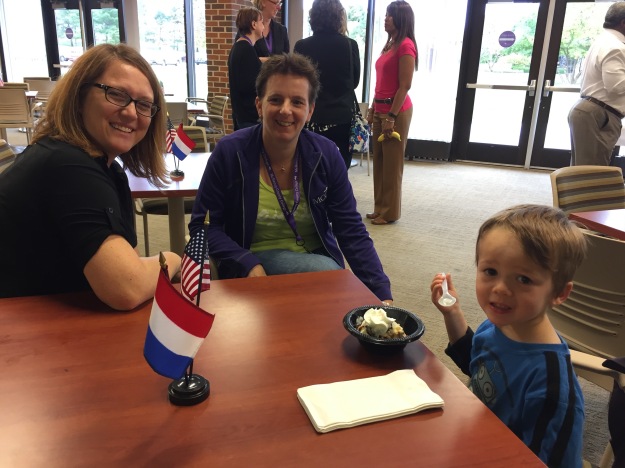 Lisa and Eli welcome Jacqueline to the U.S.A.!

Last night after a full day, Noëmi and I went home to cook some chili for dinner, and then watched the presidential debate with Trevor.

Today, I’m bringing her into the city with me for my Thursday night graduate class, and first we’ll stop by Millennium Park to see the Bean. We’ll have more pictures, so check in later on this week to get updates!